What They Thought of Programmers.

It is interesting and educational to go back in time and look at how programmers were represented in popular culture. What did they think of us? Did they know who were?

It’s important to remember that prior to 1946 there were no programmers, that computers themselves were virtually unknown until the late ’50s. That virtually nobody lived next door to a programmer back then.

Nowadays virtually everyone in the western world, and even in much of the developing world, is surrounded by computers. And while programming remains a mystery to many, programmers are common neighbors.

So let’s scan the last six decades and watch as the culture changes it’s view of just who we are and what we do.

It’s best to begin at the beginning. The first truly classic Science Fiction movie. Forbidden Planet. If you haven’t seen it, you are missing something profound and spectacular. I urge you to watch – even study – it.

There are no explicit mentions of computers or programmers in this movie. The concept was simply not something that the public could relate to. However there was a machine. A very big machine. And the implication was that it was intelligent, but not sentient. 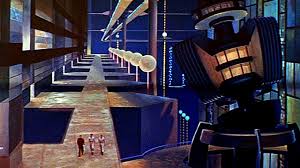 In the movie the anti-hero Dr Morbius is marooned on the uninhabited world of Altair 4. He discovers an ancient alien machine. Two decades later rescuers arrive. He shows them the machine and states: “I have reason to believe that years ago a minor alteration was performed throughout the entire 8000 cubic miles of it’s own fabric.”

The programmers of that big machine are long dead; but they are described as belonging to a highly evolved and benevolent alien race.

There is another machine on this planet. It is a robot named Robby. 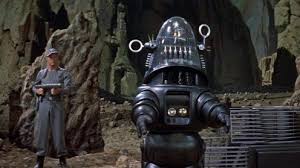 Robby is clearly intelligent and sentient. Robby speaks English, with the inflection of a proper british butler, rather in the manner of Carson on Downton Abbey. Dr. Morbius claims to have created the Robot; so he is clearly the programmer.

Morbius is studious, austere, even dour. He is not evil; but he is a hermit and does not particularly enjoy the company of others. He is massively intelligent but quite anti-social.

Now remember that this was the ’50s. Missiles and A-bombs. Scientists had a particular stereotype in those days, and Dr. Morbius is consistent with that; though with a hint of Captain Nemo.

Yes, I’m going backwards two years, but only to say that I did not forget this movie. I just don’t count it as significant. This was a movie made for kids, and the semi-intelligent robot is much more like Lassie than Robby. The creator of Tobor is an eminent scientist who also fits the mold of the ’50s.

With one exception, we learn very little about the programmers in Star Trek. The computer, however, is fascinating. The computer was voiced by Majel Barrett, Gene Roddenberry’s wife. She also played Nurse Chapel, and “Number One” in the pilot. She played the computer as utterly flat. The voice was monotone. The information was factual. The computer never offered an opinion, or an emotion of any kind. The computer was nothing more than a tool.

The exception was the episode entitled The Ultimate Computer in which a new intelligent computer was hooked up to the enterprise. The creator (and implicitly the programmer) of this machine was Dr. Daystrom. Both he and the computer have a simultaneous nervous breakdown, and Kirk has to “pull the plug”.

The implication is that programmers are so intelligent and driven that they eventually lose emotional stability.

This is one of the first instances of the computer acting as the villain.

Hal 9000 is the villain of this story. We know little of the programmer, Dr. Chandra, except that he taught the computer a song.

Note that during this era it is the computer that is the character. The programmers, if mentioned at all, are ancillary.

Another movie in which the computer is the hyperintelligent villain. The programmer is a scientist from the Dr. Morbius mold.

The computers are among the main characters and are essentially a race of slaves. We never meet the programmers, but it’s clear that they must be morally bankrupt.

Hero programmer defeats evil computer. This is the first time we see the programmer as a good guy who defeats the computer. The movie is also a foreshadow of The Matrix because the main character gets transported into the computer. As a programmer (though they call him a “user”) he as powers.

The hero programmer is a world famous scientist and business man. He does not live next door.

This one is indirect. Well meaning humans program the evil computer, Skynet, that then programs the Terminator to kill Sarah Connor. So this is a singularity prediction. The computers program the computer.

One interesting aspect of this film is the depiction of the human-like machine being so utterly focused on it’s mission. At first you think of the terminator as almost human. But bit by bit that humanity is lost. In the end you see only the machine, half-destroyed, missing legs and all vestiges of human form, still intent on one purpose only.

(Sigh) Jonny number five is a combat robot whose programming gets scrambled by a lightning strike. This makes the robot sentient and purely innocent. Eventually the robot invents it’s own moral code which is vastly superior to anything human.

So there is no programmer in this case – except nature or God or… And in that case all human flaws are exposed by the purity of the programming.

This is our first real glimpse of a humanized programmer. Dennis Nedry is not a mad scientist, not a well respected researcher, he’s just a common ordinary programmer. And he is a flawed human. Oh, there’s a bit of the Twinkie eating, basement dwelling stereotype there; but this is the first time the movies show a programmer as someone who might live next door.

The computer is not a character at all. It is just a tool (“a Unix System”).

The main character is a programmer who must user her skills as a programmer to defeat a ruthless plot to frame her for murder and other nefarious things.

This is another case where the programmer could be someone next door.

All the human characters are programmers. They all live next door. But, given the red pill, are transported to an alternate reality where they can “see” the code. They are engaged in an apocalyptic fight over good and evil. The main character is a type of Jesus.

Note the progression. Over the years the representation of the computer changes from Main Character (Good or evil) to supporting character to tool. The programmer changes from obscurity to mad or damaged scientist, to Nature or Skynet, to the guy next door, to hyper-aware Savior.

What does this say about society’s opinion of us. Does society really think we are the folks who live next door who are simultaneously the hidden saviors?

Well, maybe we don’t want to read too much into things. Note that I stopped this review just prior to the millennium. Have there been any movies since then in which programmers played a significant role?

Actually, I think we have transitioned off the screen and have become part of the movie industry. Virtually no movie made nowadays can be made without massive computer graphics and programming effort. So now they know us intimately. We do live next door. And they don’t need to put us on the screen anymore.