Laughter in the male dominated room.

Look at this graph. It should scare the hell out of you.

It comes from Episode 576 of Planet Money on NPR. In that episode they suggest that the reason women have bailed out of software careers is because marketeers in the ’80s decided to market home computers as toys for boys, sort of like Tonka Trucks. I’m not sure I agree with their conclusion; but the data they present is still frightening.

The data fits my own experience. As a young programmer in the early 70s, I worked with a number of women. In my very first job they represented about a quarter of the total programming staff. Oddly, they were all several years older than I was. Perhaps that was because I, and my buddies, were barely 20. Still, perhaps my buddies and I were on the first wave of the male dominated cohort.

As the years went by, the ratio of women I worked with declined significantly. Why? What is it about software that shuns women? Women were prevalent in the field in the ’60s and early ’70s. What happened? This is Anita Sarkeesian. She produces a youtube video series entitled: Tropes vs. Women in Video Games. It’s fascinating. If you want a taste, I recommend this one. The points she makes (and she makes them well) are pretty disturbing.

What’s more disturbing is the harassment she’s experienced. Rants. Raves. Death Threats. A computer game that allows you to beat her face in. I mean, yeah, that’s pretty sick.

###Correlation? In what sense are these two things related? If you look back at that graph, there must be some force that’s pushing that red line down. And there must also be some force that is motivating the harassment against outspoken women in software like Sarkeesian. Is it the same force?

###Hints in the Stumbles. Several years ago I gave a talk at a Ruby conference. In that talk I jokingly compared C++ to testosterone, and Java to estrogen. This elicited a wave of tweets from some disappointed women who felt that I was demeaning women in general. That was not my intent; but when it was pointed out I agreed and apologized. The apology was graciously accepted; and we all moved on. I felt the issue was closed.

A couple of years later I was giving a talk to a group of C programmers. The talk took a comic turn towards COBOL, and I put up this image of Commodore Grace Hopper. 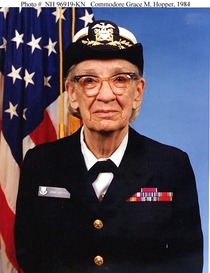 I said something like: “COBOL was invented by Grace Hopper. Here she is, in her little hat.”

After the talk, a courageous young woman took me aside and chastised me for belittling Grace Hopper. She said: “When someone like you says something like that, it doesn’t help women like me.”

Again, she was right, and so I made a public apology and moved on. Again, I thought the issue had ended.

And then I made the comparison to a Sultan and his concubines. The metaphor was crude, and I wanted it to be crude to drive the point home. I also wanted it to be funny. It was a kind of joke.

All hell broke lose on twitter. Some people said the post was sexist. Others used the word Misogyny.

I pulled the article within two hours of posting it, rewrote it, and apologized again. But this time I kept the issue open in my mind. Three times? Something was clearly wrong with aspects of my delivery; but I didn’t know what it was. I think perhaps now I do.

Why did I think my “estrogen” joke was funny? Others did too, because there was laughter in the male dominated room.

Why did I think my “little hat” comment was funny? Others did too, because there was laugher in that male dominated room.

Why did I think my “framework-users as concubines” joke was funny? Hell, I still do! I can feel the giggle inside me trying to bubble up even now.

###The Butt One of the folks who chided me about my “concubine” article said it pretty well. I’ll paraphrase: The suffering of women should not be used as the butt of one of your jokes. It was that point, amidst all the other complaints, that made sense to me, and was the reason I rewrote the article and made my apology.

In general, the act of using a class of people as the butt of a joke, is demeaning. You treat those people as things to be used in pursuit of a goal. And that’s not right, even if all you are trying to do is to make a technical point about frameworks, or COBOL, or Java.

Several years ago I sat at a bar with Desi McAdam (@desi) who was a co-founder of DevChix. I told her that when I get a program to work, I feel like I’ve slain the beast and I’m bringing home meat. She responded by saying that she felt that she had nurtured something into being.

I love that story because it’s a celebration of the wonderful difference between men and women; a difference I think we need and should cherish. I have told that story several times to several audiences. It always elicits a laugh. Why? What’s funny about it? Is it funny because it’s resonates so well with common experience? Is it funny because it’s an instance of a common stereotype? And is it funny to the women in the audience; or is the laughter I hear just the laughter of men in a male dominated room.

###The Force. Is that laughter the force that’s pushing the red line in that graph down. Is it laughter, at the expense of women, that’s causing women to flee from software careers. Is it that laughter that, in the extreme, is driving that horrible harassment?

Could the women be fleeing from the laughter in our male dominated room?