A friend of mine posted the following on facebook. He meant it as a troll; and it worked, because it irked me. 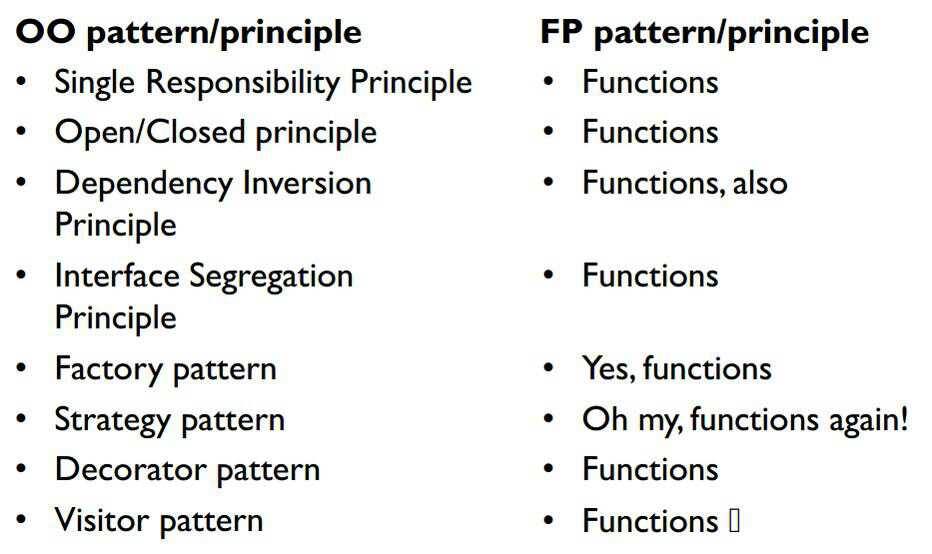 There are many programmers who have said similar things over the years. They consider Object Orientation and Functional Programming to be mutually exclusive forms of programming. From their ivory towers in the clouds some FP super-beings occasionally look down on the poor naive OO programmers and cluck their tongues.

That clucking is echoed by the OO super-beings in their ivory towers, who look askance at the waste and parentheses pollution of functional languages.

These views are based on a deep ignorance of what OO and FP really are.

Let me make a few points:

So what are the differences between OO and FP? What does OO have that FP doesn’t, and what does FP have that OO doesn’t?

Are these two disciplines mutually exclusive? Can you have a language that imposes discipline on both assignment and pointers to functions? Of course you can. These two things don’t have anything to do with each other. And that means that OO and FP are not mutually exclusive at all. It means that you can write OO-Functional programs.

It also means that all the design principles, and design patterns, used by OO programmers can be used by functional programmers if they care to accept the discipline that OO imposes on their pointers to functions.

But why would a functional programmer do that? What benefit does polymorphism have that normal Functional Programs don’t have? By the same token, what benefit would OO programmers gain from imposing discipline on assignment?

There really is only one benefit to Polymorphism; but it’s a big one. It is the inversion of source code and run time dependencies.

This inversion allows the called module to act like a plugin. Indeed, this is how all plugins work.

Plugin architectures are very robust because stable high value business rules can be kept from depending upon volatile low value modules such as user interfaces and databases.

The net result is that in order to be robust a system must employ polymorphism across significant architectural boundaries.

The benefit of not using assignment statements should be obvious. You can’t have concurrent update problems if you never update anything.

Since functional programming languages do not have assignment statements, programs written in those languages don’t change the state of very many variables. Mutation is reserved for very specific sections of the system that can tolerate the high ceremony required. Those sections are inherently safe from multiple threads and multiple cores.

The bottom line is that functional programs are much safer in multiprocessing and multiprocessor environments.

Of course adherents to both Object Orientation and Functional Programming will protest my reductionist analysis. They will contend that there are deep philosophical, psychological, and mathematical reasons why their favorite style is better than the other.

My reaction to that is: Phooey!

Everybody thinks their way is the best. Everybody is wrong.

What about Design Principles, and Design Patterns?

The passage at the start of this article that irked me suggests that all the design principles and design patterns that we’ve identified over the last several decades apply only to OO; and that Functional Programming reduces them all down to: functions.

Wow! Talk about being reductionist!

This idea is bonkers in the extreme. The principles of software design still apply, regardless of your programming style. The fact that you’ve decided to use a language that doesn’t have an assignment operator does not mean that you can ignore the Single Responsibility Principle; or that the Open Closed Principle is somehow automatic. The fact that the Strategy pattern makes use of polymorphism does not mean that the pattern cannot be used in a good functional language[4].