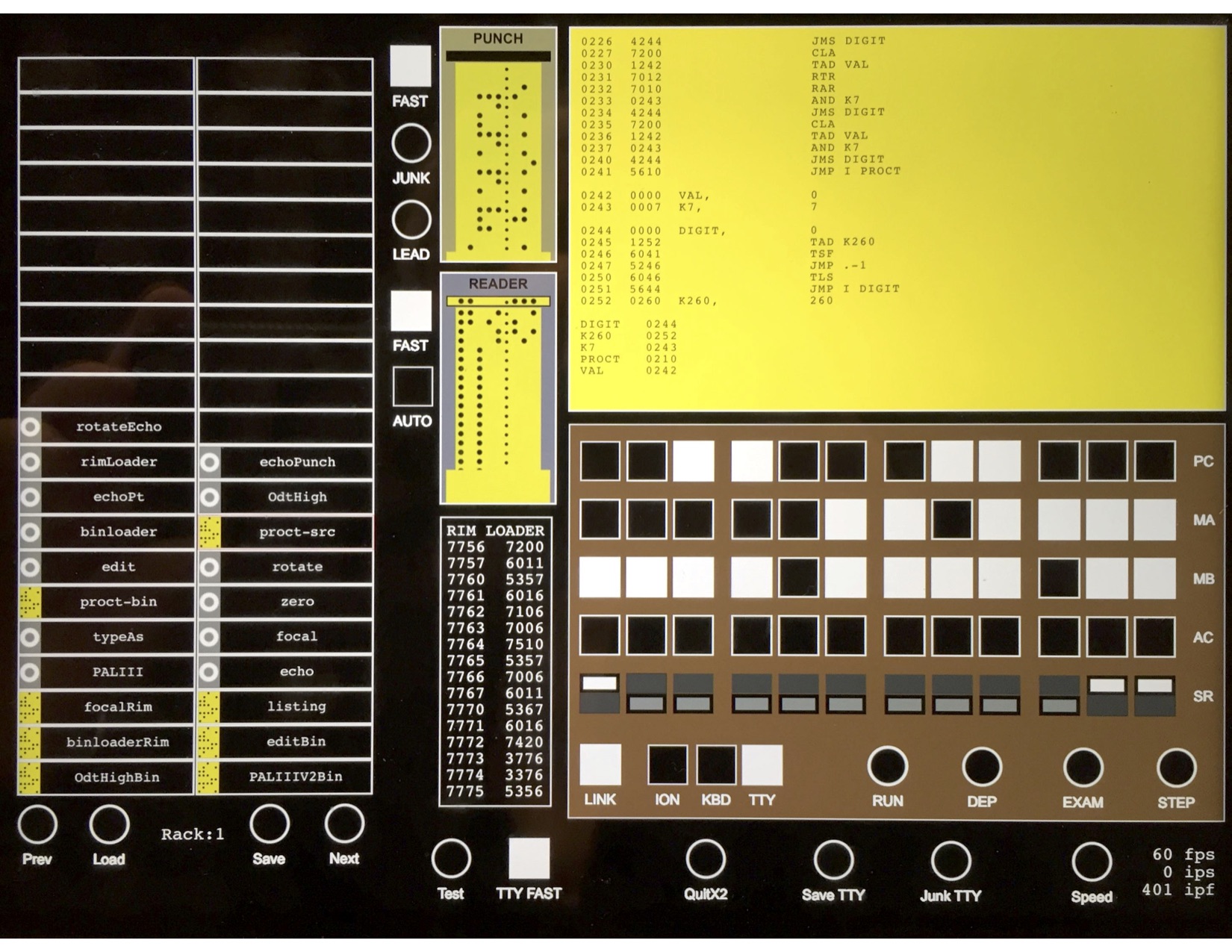 My purpose in writing this emulator (other than sheer nostalgia) is to use it as a training tool for new programmers. I think every new programmer should spend a week or two programming one of these old machines. It seems to me that there is no better way to understand what a computer really is, than to touch a real computer and program it at the bit level, in machine language. Once you have done that, all the magic disappears and is replaced with cold, hard reality. And, let me tell you, programming a PDP-8 is cold, hard, reality. Oh boy, is it ever!

I’ve tried to be faithful to the machine and it’s environment. The front panel is a decent abstract representation of the original PDP8, and the lights blink appropriately, and with the correct data. (though I couldn’t resist making the lights touch sensitive, like the ECP-18). 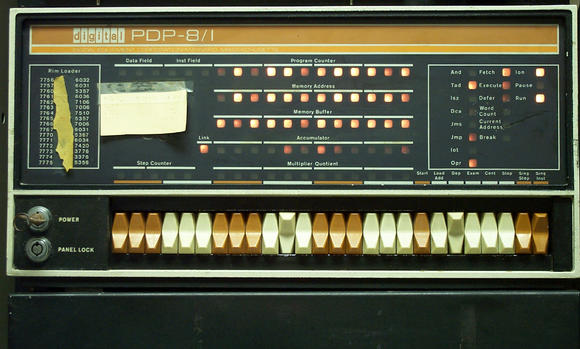 The paper tapes in the reader and punch move at appropriate speeds, and the holes represent the true data. They also make the right kinds of noises. The teletype prints at the appropriate speed (though you can speed it up if you want (you will)) and behaves very much like an ASR-33, making all the appropriate noises, and responding properly to carriage return and line feed characters, etc. (Yes, you can overprint!)

I found some binary images of old PDP8 paper tapes here, and managed to get them into my emulator by munging their format with a little C program I wrote, and then transporting them to the iPad using Dropbox. The results have been both satisfying and heart-wrenching. That ancient code works!

I sit in front of my half-pound, $600 iPad, in its nice little case, and its bluetooth keyboard, surrounded by programming manuals, and marked up listings of a program I am working on. And I realize that I’m using code written half a century ago by men and women (probably a lot of women back then) who hauled themselves up by their bootstraps to get that silly little machine working. A machine that weighed 500lbs, was the size of a refrigerator, and cost $20,000 in 1967.

Could those men and women ever have guessed that their code would be running in a hand-held tablet computer and would be used to train programmers in the twenty-first century? Some – many – must still be alive. I wonder what they’d think if they knew. 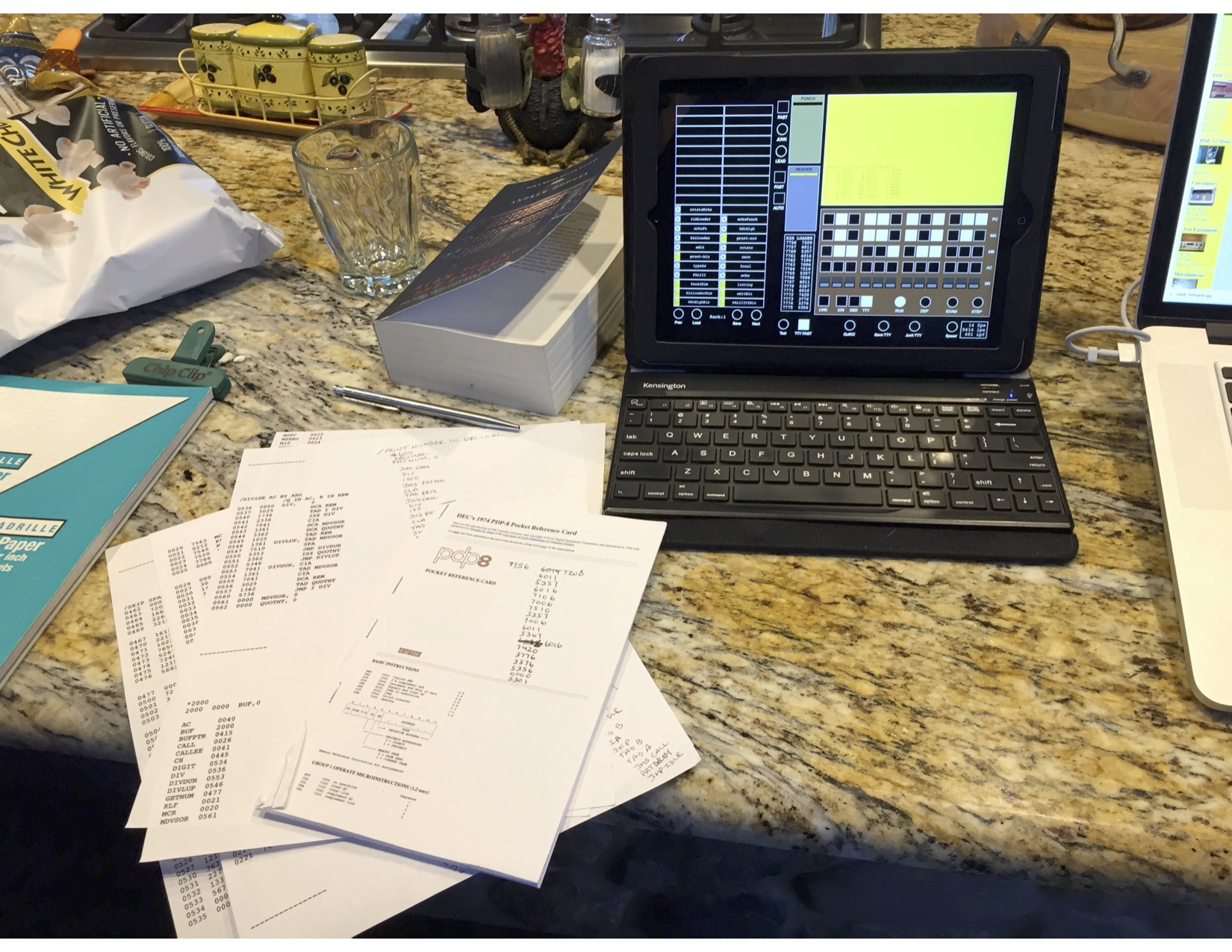 My emulator is written in Lua, using the Codea framework for the iPad. This is a hugely convenient language for iPad development. Lua is fast (enough), and Codea has wonderful graphics primitives, and a simple, yet very effective graphics framework for developing highly interactive animated programs.

This made the animation (and sound generation) of the front panel, the teletype, and the paper tape reader/punch a snap.

Emulating the PDP8 internals was a bit of a challenge since Lua only has one numeric type: floating point. Doing 12-bit logic using floating point math is, uh, interesting. On the other hand, I get a huge kick out of watching FOCAL (FORmula CALculator: a language similar to Basic) run on my PDP-8, and do it’s own floating point math, using the logical operations that I concocted from Lua’s floating point math. <grin> You should see those lights blink!

The execution speed is about 4,000 instructions per second. While that’s 1/7th the speed of a PDP8/S, it’s pretty impressive for an iPad running a “byte-code interpreted” language like Lua, emulating 12 bit logic using floating point math! I wasn’t expecting that kind of performance. It actually runs all that old DEC software at reasonable speed. Even FOCAL runs fast enough to compute square roots in half a second or so.

And, again, the blinking of the lights during a compile is deeply satisfying. Watch that and you’ll know where all those 1950s sci-fi movies got their ideas from.

##MODE-B Getting the Emulator working was really very easy. I’ve probably invested 30 hours in it overall; and that includes learning Codea and Lua.

The development process was lickety-split. Codea’s Lua editor for the iPad is intuitive and powerful (though it has no refactorings <sob>). The edit/test loop was, perhaps, 10 seconds long. I could add a line or two of code, run the app, see the effect, and then hop back into the editor just like that. It was a satisfying treat, and I had a ball doing it.

Of course I wrote tests for the tricky bits. I wrote a little test framework just for that purpose, and I put a TEST button on the front panel of the emulator to make it easy for me to run those tests. The emulation code itself would have been nearly impossible if I hadn’t had unit tests. And of course, I used the TDD discipline for that code. In the end, there were over 100 tests for the various instructions and behaviors of the PDP-8.

For the GUI, on the other hand (and there’s a lot of GUI code), tests were unnecessary (<GASP>). My eyes were the tests. I knew what I wanted to see, and so I spun around the edit/test loop every 10 seconds. Writing tests in a TDD style would have been horrifically difficult, and an utter waste of time.

On the other hand, I was still using the TDD rhythm. I knew what I wanted to see on the screen. That was my test. I simply modified the code until that test passed. So even though I wasn’t writing tests, it felt like I was – it felt like TDD.

It’s true, of course, that I don’t have automated regression tests for my GUI. On the other hand, it’s absurdly simple to ensure that everything is working. So far the lack of automated GUI tests has not impacted my loop time.

Of course without refactoring tools the code got a bit messy. I refactored when I couldn’t stand it anymore; but the backlog of messiness is larger than I’d like. I’ll continue to clean that code over time; but it’s much slower going without good refactoring tools.

Anyway, for the sake of this article, let’s call this style of programming: MODE-B. MODE-B is the style that allows you to edit on the screen, and see the results either on the screen, or in a passing test, in seconds. It’s a hyper-speed development loop that doesn’t require listings, pencils, compile time, setup time, or any other impediment. The time between editing the code, and seeing it run, is much less than one minute.

##MODE-A Having gotten the PDP8 Emulator to work. And having gotten all the old tools, like the paper tape editor, and the Pal-3 assembler, up and running. I set about to write a simple program. This program would allow the user to type a simple formula on the keyboard, and then it would print the result. For example, if the user typed: 25+32, the computer would print 57.

On a PDP-8, this is a non-trivial program. I’ve included it below for those of you who want to see how a pretty poor PDP-8 programmer has written it.

The process was the same as the process I used back in the late ’70s when working on assembly language programs on a Teradyne M365 (An 18 bit relative of a PDP8). We had magnetic tape, instead of paper tape; and the computer was a bit more powerful than a PDP-8. But the process was still the same. It goes like this:

Assume that you are in the middle of writing the program below. You’ve already got some of it written, and you are adding to it. Remember, this computer only has 4K words. It can’t store much in it’s memory. Remember, also, that the only mass storage you have is paper tape. So your source code is on a single long paper tape.

This process is highly abbreviated. There are lots of littler steps in there, but you get the idea.

This is MODE-A. It’s a very fragile, error-prone process that takes an hour or so to execute. It could be a lot more for a large-ish program. A very small program might make it around the loop in 15 minutes. The program I was writing grew to be about 20-30 minute or so, and I cheated by allowing my “teletype” to run at 10X the normal rate.

To get my silly little program to work, I went around that loop seven times. It took me about a week, and about five hours total. A lot of that time was writing the code with a pencil because, without a screen editor, there was just no way to avoid hand writing, and using a lot of eraser.

Back in the ’70s I spent days, weeks, and years working in MODE-A. All programmers did. That was what programming was back then.

In MODE-A you take nothing for granted. You do everything deliberately and carefully. Because that’s the only way to go fast. (If “fast” is the word.)

##MODE-A vs MODE-B MODE-A is a lot slower than MODE-B. The loop time is impossibly large, and the amount you can get done in each loop is ridiculously small. For example, my first loop through this process was to write, and debug, the subroutine that read in a line of text from the keyboard, terminated with a CR (Carriage Return… Yes, the teletype had a “carriage”, or rather a “print head” that could be “returned”.)

MODE-B is fast! Really, really, fast. The time through the loop is very short, and you can get a lot done in each loop. For example, it only took me a few loops around to get the paper tape animation through the reader and punch to work correctly. Every PDP-8 machine instruction took a loop or two. Getting the scrolling of the TTY paper took two or three loops.

And, of course, I wasn’t using listings. I didn’t write the code on paper first. I could go anywhere in the program I wanted and edit any line I wanted in a flash. I had syntax highlighting, automatic indenting, search and replace, scrolling, tabs, and on-line documentation.

##The MODE-B Imperative! So then why do so many programmers still work in MODE-A? They do, you know. They pile mess upon mess, and framework upon framework, until their loop time grows from seconds to minutes and longer? They inject so many dependencies that the builds become fragile and error-prone. They create so many unisolated external dependencies that they might as well be using paper tape. Why would anybody do anything that increased their loop time? Why wouldn’t everyone defend their loop time with their lives?

Isn’t avoiding MODE-A a guilt-edged priority? Shouldn’t we all do everything we possibly can to keep our development cycle in MODE-B? Isn’t MODE-B an imperative?

Do you want to know the secret for staying in MODE-B? I know what it is. I’ll tell you.

The secret for staying in MODE-B is to use MODE-A behavior.

I just discovered who wrote the PAL III assembler for the PDP-8. Hold on to your hats. It was Ed Yourdon.

PDP8 Program to accept two numbers and a single operator, and print the result.