One of my regular bike-riding podcasts is Astronomy Cast, by Dr. Pamela Gay and Fraser Cain. Indeed, if you go to cleancodeproject.com you’ll see that Astronomy Cast is one of the charities on my list of favorites. Make a contribution and I will send you a green Clean Code wristband, or coffee cup, or sweatshirt. If you listen to Astronomy Cast you’ll also find that I am a sponsor.

This podcast is always about science; and the science content is quite good. It’s techie. It’s geeky. It’s right up my alley. I’ve listened to almost every one of the 399 episodes. If you like science – especially science about space and astronomy, this is a great resource.

Not the big kind that gets reported. Not the notorious kind that gets people fired. Not that kind – though there’s enough of that to go around. No, this was about commonplace, everyday, normal sexual harassment.

As just one example, [Time code 23:10] Dr. Gay recounts: “…because this was somebody who, when he was drunk, grabbed my boob at one point, as you do, at a conference, at a bar.”

As you do? As you do? As who does? My mind is still reeling from this. She made it sound like it was a regular, normal, occurrence. Indeed, in a particularly gut-wrenching blog she wrote:

“…we, like every other segment of society, have our share of individuals who, given the right combination of alcohol and proximity will grab tits and ass. I’ve had both body parts randomly and unexpectedly grabbed at in public places…“.

Who does something like that? What kind of low-life, scumbag, knuckle-dragging, troglodyte, behaves that way? Drunk or not? Didn’t their fathers ever teach them about respect?

This is a huge disconnect in my mind. When I go to conferences I do not have people walking up to grope me. The fear that that might happen never enters my mind. So, for me, this kind of thing doesn’t exist. It’s not in my universe of experience.

And yet, Dr. Gay says that when she goes to a conference she has to make sure her rear is against a wall, and her arms are folded in front of her chest, just to ward off the potential gropes from drunken dipshits that she works with.

I can’t imagine living like that – having to tolerate being manhandled – having to always be on guard against it. Having to wonder whether merely resisting it was harming my standing in the community; and harming my ability to earn a living.

And it made me think: Could this be happening in the software community as well? My community?

Are women programmers being manhandled at their places of employment and at software conferences? Do they have to continually fend off unwanted pats, slaps, pinches, and gropes? Do they have to worry that their careers could be damaged by speaking out and defending themselves? In order to get along in this community do women have to pretend that such actions are just clumsy, harmless, fun-and-games instead of the wretched, disgusting actions that they actually are?

So I did some research on this topic. I was horrified by what I found. The number of recorded events is large, and strikes very close to home. I was mortified to find that it has taken place at conference that I have attended. It turns out that women in our field have to deal with being manhandled, in one form or another, on a regular basis.

Here are just a few of the resources I’ve found:

Although these lists contains hundreds of events; they list only those that were reported. If you read through a few of the references you’ll find an ubiquitous thread. The women interviewed say things like: “Something like this happens to me two or three times a year at a conference.” or “This one was bad, but I’ve had worse.” The undercurrent of these lists makes it plain that the lists are just the tip of a very large iceberg.

One very disturbing aspect of my research was the finding that many descriptions of harassment are referenced by third parties; but the primary articles by the victims and witnesses have been taken down by their authors. It’s as if the record of such occurrences has a lifetime; after which the information gradually disappears. Some authors explain the removal of their descriptions by replacing them with a message that says, in effect, that they needed to write it; but that it hurts too much to leave the record intact.

This voluntary deletion implies that the damage done by these reprehensible actions is so significant that the victims, and first hand witnesses, cannot tolerate leaving the record intact.

Some of the descriptions are heart wrenching depictions of women being obviously groped by a co-worker or boss in public, in plain view. Sometimes someone intervenes; and cudos to those folks. But it’s only sometimes.

There was a time when just under half of all programmers were women. Today that number is less than 10%. I’ve puzzled over this for years now, and even written about it. Why aren’t women becoming programmers? But if this kind of stomach turning behavior is common in our community, then the puzzle is solved. No wonder women avoid the field! No wonder at all. I imagine that they find out, very early on, that to stay in this field is to have to submit to being regularly manhandled by too many of their co-workers and bosses. 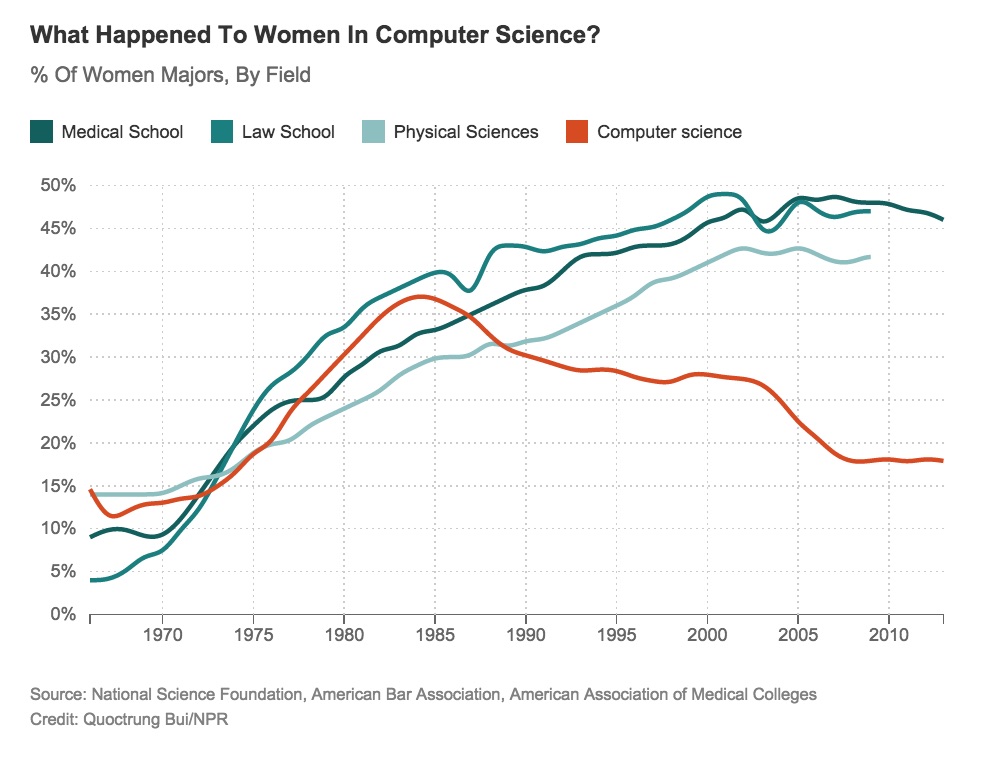 The graphic above shows that women started leaving our field in droves right around 1985. Why would this be? If they are being driven out by the bad behavior of their co-workers, did that bad behavior begin just as computers were becoming household appliances, and the demand for programmers shot through the roof? Did it begin shortly after the average age of programmers began to decline by 10 years?

Along those lines I found this statement from the When Geeks Attack article to be insightful.

…the stereotypically introverted programmer – think of the Mark Zuckerberg portrayal in The Social Network – has evolved into a far more cocksure, frat-house kind of figure. These so-called brogrammers have reason to believe they can act with impunity: The demand for computer engineers is outpacing virtually every other industry in the nation, according to the U.S. Bureau of Labor Statistics. That has translated into six-figure salaries and over-the-top perks like concierges, car service, and free gourmet meals. Wall Street’s masters of the universe have been supplanted by Silicon Valley’s big-swinging code jocks. And thanks to the anonymity of the Internet, fueled by a dogmatic belief that all speech is free speech, they have made the very act of being a woman in the industry something of an occupational hazard.

Is that it? Is it really about status and power? Is it really about the corruption that power breeds? Are there programmers who are so sure that they are indispensable, they feel immune from reproach? Do their “incredible brains”, and their “mastery over frameworks”, make them feel entitled to fondle?

If so, why aren’t women programmers sharing in this kind of status and power? Why is it denied to them? Is it because they don’t express power in terms of sexual harassment and abuse as much as men do?

As I said of our industry in a recent blog:

“Power has a gender, and that gender is male.”

Is that because men are able to intimidate women through commonplace sexual harassment?

Look back at that red line on the graphic. Is that line the reciprocal of the amount of sexual harassment in our industry?

I write a lot about professionalism. So let me just say this for the record to all of you who want to be professional programmers:

To employers, team leads, and managers: No one is so indispensable that you should tolerate, or cover up, this kind of behavior. If it happens, and you can prove it, quick termination should be the result.

To the rest of you: If your employers do not act decisively in such matters, quit!